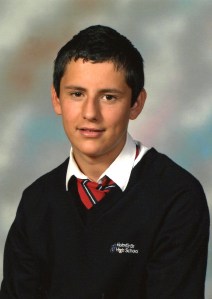 We don’t normally go on about exam results but in this case we wanted to say something about Huw’s GCSE results from the exams he took at the beginning of March.

Like all the year 10s at Holmfirth High the plan was for Huw to complete one set of science GCSE exams in year 10 – doing exams for 2 modules in November, 2 in early March and the last 2 in June.  That means he would have been well on the way to a Core Science GCSE this year.

Families are often proud of their children’s achievements (especially in something really important.)  We can’t describe how proud we are of how well Huw did in March.  He worked hard for these GCSE exams (and his PE GCSE assessments that he was getting A or A* in) and was pleased with himself for getting on with the revision and stuff.  He took responsibility for preparing for these exams and was proud of that.  He was pleased with his November results and was on great form and really happy leading up to the exams and the days he had taken them.  He was optimistic about his results and really hoped to get a B in maths.  Well he DID get a B in maths and I so hope he knows how well he did.  Well done Huw – we couldn’t be more proud of you – you make us so proud every minute of every day.

We hope everyone at school got the results they were hoping for – as long as the guys at school do what they can and get close to their potential, that’s all you can ask for.  Good luck to all Huw’s friends and family in year 10 in their final science exams after half term and to those in year 11 who will be doing a lot of GCSE exams next month too.

Read more from Trust News
← A few more pics of Huw as a teenager
Nick: Holidays over Spring Half Term week →