Ellie Sinkinson : I’ll miss you always and love you forever

Ellie was a good friend of Huw’s ever since they were in reception at Upperthong Junior School.  Ellie and Huw’s Upperthong friends have been thinking of Huw a lot this weekend as it is Gala weekend and they all had a lot of fun together with Huw at the galas over the years – especially last year.  I’ll put something on the web site about this year’s gala tomorrow, but for now here are Ellie’s lovely memories – thank you Ellie. 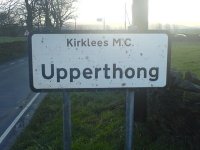 Dear Huw.  I’m going to miss you so much!  Who’s going to be there when I turn around in history to smile at me?!  I know I never told you but you were an amazing guy and you meant the world to me and everyone else!  There is an empty seat in RE and it just doesn’t feel right.

It just shows how many people loved you, around 200 people from years 7 to 11 laid flowers .  You meant a lot to everyone and you played a huge part in a lot of people’s lives.  To see you nearly every day for 11 years not at all is hard but the whole year has come together as a family and we are all supporting eachother.

I really appreciate that you’ve taught me not to waste time.  I’m going to live my life to the fullest it’s what you would have done.

I’m going to miss my friend so much.  I’ll never forget you Huw Thatcher, me memories of you are tatooed onto my heart.  I’ll miss you always and love you forever.  Gone but not forgotten. In our hears for ever.  I ❤ you.  Ellie x x x x.  you really are the world’s greatest.

Dear Nick, Jenny and Carys.  I’d like to share with you the great memories I have had with Huw.  In year nine we went on a trip to Germany with school.  I remember I was sat infront of him on the coach and we were waiting to go onto the ferry.  Unfortunately we were delayed, but I was this as an opportunity to have some fun.  I turned round to Huw and said ‘Huw you know because you love me’…….and he then said ‘yes’ and I said ‘can I do your make up?!’  He didn’t even put up a fight.  he sat back and loved the attention from all the girls.  Huw was always up for having fun, he was great that way.

After being at school with him for nearly 11 years I’ve got used to his drumming habit.  he sat behind me in German and every lesson I remember having to turn round every few minutes to tell him to stop!  But he wouldn’t even know he was doing it, he would even do it while he was talking to you!

I remember in junior school I took packed lunches every day.  One day I had an egg sandwich.  I got it out and everybody said ‘ewwww’ in disgust and moved away, joking around. And Huw came and sat next to me.  Even though he was being nice, every day he saw me he called me “Eggy Ellie”.  It’s stuck with him till year 10.  Unfortunately for him I called him “Pooey Huwy” so I got him back!

At the Upperthong Gala last year I played football with him.  We all know Huw was a ladies man, and I remember all the girls shouting at him ‘take your top off’ ha ha, Huw just blushed and carried on playing.

I’ll miss the times when I came round to play on the trampoline.  I’ll miss the way he always showed off.  Huw was such a talented boy and he lived his life to the fullest.  He had loads of friends and he was the nicest guy I have ever met.  He was never mean to anyone, he loved to tease and joke but nothing was ever taken in offence. He didn’t deserve to go so soon but the time he spent with his family and friends he enjoyed.  I’ve never seen him without that beautiful cheeky smile on his face.  He would light up the room.

There will always be a gap in our hearts and Huw will never be forgotten.  Nothing will be the same without him.

He was an amazing son, brother, friend, football player, cricket player, the list is endless.  he’s the boy no one will ever replace.  Your son and brother was amazing and you should be very proud x x x x x

Read more from Personal Memories
← Over £500 raised in Cardiff this week too : with love from Huw’s Granny
Thank you for some lovely ways to remember Huw at the Upperthong Gala →