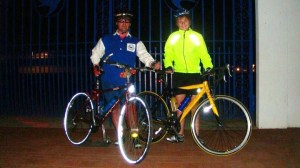 Dave Brennan and Nick pedalled behind and watched with awe as Huw’s Uncle Steve (46 yrs old) and Huw’s cousin Doug Wilson (13 years) left us in their wake as they powered up Holme Moss at 10.00pm on Friday 1st July.  Steve had cycled 179 miles from Cardiff and Doug 102 miles of it earlier in the day as they ripped into that mountain like men possessed to complete their last 9 miles.  Dave (who is a seasoned and very competent cyclist) and Nick, had cycled up the Holmfirth side of the hill at 9.00pm and down the other side to meet them – and they pulled away from us up the Woodhead side.  Inspired by the 3 cars following and their massive achievement – and mostly inspired by Huw Thatcher who they love and will never forget for the rest of their lives.

Steve and Doug tackled Holme Moss like it wasn’t there, having set off from Cardiff at 3.30am.  Steve had 4 hours sleep the previous night before completing the 189 mile trip and Doug completing 112 of it.  They arrived at Sands 19 and a quarter hours after setting out early on Friday morning, bouyed by the free spirit and gorgeous smile of Huw Thatcher.  Doug fuelled by amazing courage and natural strength for a 13 year old – along with a heavy does of adrenolin.  Steve powered by legs like pistons, natural courage, aderenolin, ibuprofen and caffine.  Both of them powered by a single purpose; love for their beautiful and unique nepwhew and cousin.

Doug and Steve who have raised well over £1,000 for brain injured people in the process, arrived at Sands to the applause of nearly 40 people – who could appreciate the magnitude of the achievement – but who probably couldn’t easily appreciate the hills that were climbed, the aches that were endured and the sheer distances covered during the day.

Steve also donated a valuable football antique to the Trust at the end of the ride, and both lads were moved and proud on arrival at Sands.  Respect to both of you lads – an achievement that will be with you and Huw’s family forever – and an achievement in the name of another talented athlete, Huw.  You creamed Holme Moss lads, after all those miles!

Here are some pics of the lads arriving at Sands – with more  added on 12th July.

For previous info click this link “From Cardiff With Love”.

Read more from Previous Activities
← Thank you for some lovely ways to remember Huw at the Upperthong Gala
They sang & played their hearts out: two superb bands put on a stunning night to remember a stunning 15 year old →