Liam Mortimer : you knew when something was up and cared for everyone 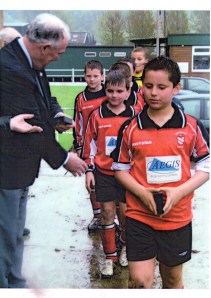 With thanks to Liam Mortimer (and his Dad Neal) for the memories of Huw.  Huw’s recent time with Hepworth United saw him in a formidable central defensive partnership with Sean Brennan.  But before that in 7 a side football (and to start with in 11 side) Huw formed an equally formidable partnership with Liam Mortimer.  This partnership provided the team with a foundation for two 7 a side league wins, the 7 a side cup win and the 11 a side cup win.  Huw’s tough tackling, first touch and great left foot were matched by Liam’s fantastic reading of the game along with another great left foot!  Liam was also a good friend of Huw’s – and Jenny, Nick and Carys continue to value his friendship, caring nature and great sense of humour.

Liam says: Huw.  I don’t think I will be able to describe how much of a nice guy and great footballer you were but I’m going to try.

We started off as a defensive partnership to be reckoned with.  Where you did the hard work of tackling the man and heading the ball as well as you have always, and me to just pick up the pieces if you did make a mistake which was hardly ever!  I may have moved positions over the years but you have always been our defensive wall and our number 2.

It is a huge shame that we have all lost, not only a magnificent footballer but an all round great guy and great friend.  You set the whole situation we were in a great laugh but you also knew when something was up and cared for everyone.  I will miss you and I will always remember you.  Liam.

Liam’s Dad Neal says: Huw.  It was a pleasure to watch you on the football pitch.  You always gave 100% and that’s good enough for me.  You were always a gentleman and played the game in the right spirit.  You also made me laugh when you were in defence with Liam and argued like an old married couple!  To leave us so soon is a tragedy and I will always think of you when watching any football match.  Neal.

Read more from Personal Memories
← Collection by the Heavy Arts Theatre School at the Lawrence Batley Theatre on 23rd & 24th July
School’s Out : Upperthong JS parents and teachers raise £416.55 as we remember Huw’s last day at Upperthong 4 years ago →