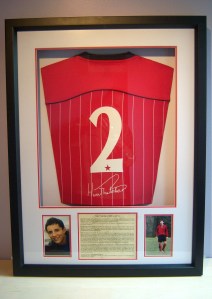 Nick, Jenny and Carys have had a Hepworth United number 2 shirt with photos and a pen- picture framed and it has been on the wall in the Sports Hall corridor – at the top of the stairs.  The shirt (pictured) is in a case  so is 3D instead of a flat shirt; Huw will always be a part of Holmfirth High School.  He will be there in people´s hearts and with his shirt ♥

With many thanks to the school.

Huw was really happy at Holmfirth High and the school was good for him.  He had particularly happy times in the Sports Centre – from the age of 6 with Hepworth United under 7s through to excelling in GCSE assessments as a 15 year old.

It was very comforting to still see Huw’s picture alongside his friends as a football prefect in the Sports Hall corridor until the autumn of 2011 – we’re so glad that he was left there and was only taken down when the rest of the year 10 prefect photos were taken down.  It felt like Huw could in a way, still be a school prefect and still be with his friends.

With the shirt and photos being put up, Huw, Big Man, Thatch and Hepworth’s number 2 will always be in the sports corridor.  A small part of Holmfirth High School and the Sports Centre will be Huw’s forever.  With lots of  love for always from Mum, Dad and Carys x x x

The words in the frame are as follows and some photos of it are at the end below:

Huw Thatcher passed away at the age of 15 and a half on March 13th 2011, playing football for Hepworth United at Brighouse.  Huw had a brain haemorrhage as a result of a pre existing condition that no one knew about, or could have known about.  Huw was a beautiful young man with everything going for him.

This is a replica of the number 2 shirt Huw wore with pride for Hepworth United between 2002 and 2011, with a print of Huw’s signature.

Huw attended Holmfirth High School between 2007 and 2011 and was proud to wear the school number 5 shirt and captain the team. He spent many happy hours at Holmfirth High and especially the sports centre, whether it was for PE lessons, football, his 7th birthday party, badminton with his Mum and Sister, or Hepworth football training which he attended with his Dad since the age of 6.

Sport was a big part of Huw’s life.  He graced the football pitch as a commanding and skilful centre back, he was a powerful batsman for Upperthong Cricket Club and his school team, and an emerging player at Thongsbridge Tennis Club.  As well as his love of sport, Huw had lots of other interests and aspects to his personality.  He loved his food, enjoyed music, and adored simply spending time with his family and friends.  Everyone who knew Huw, saw him as a natural entertainer, with a perceptive and sensitive side that drew so many people to become close to him.  Before Huw sadly left us, he was getting excellent academic results, was ready to take his Grade 5 drum kit exam and planning to go to university.  Huw will always be remembered as a contented, tall, handsome, strong, fit and healthy young man.  Huw had an exciting future ahead of him and was flourishing in so many ways.

In April 2011 The Huw Thatcher Trust was set up to remember Huw in a positive way and raise funds for brain injured people.  Thanks to the love and efforts of his friends and family, the Trust has flourished.  The fact that the Trust has been so successful is a tribute to Huw’s popularity and the huge contribution he made in his life and to the lives of those close to him.  He will be remembered by a huge number of people in many different ways: as a son, a brother, a grandson, nephew and cousin, to others as Thatch, Big Man, or simply Hepworth’s number 2.  But to everyone who had the privilege of knowing Huw he will forever be remembered for his fun loving nature, kind heart and beautiful smile.

Remembering Huw: fundraising on behalf of the Brain Injury Rehabilitation Trust, part of the Disabilities Trust registered charity no. 800797.

Read more from Memorials
← Lauren Samson & Marie Brammah: ‘You were so lovely’….’you are one of the sweetest, kindest people I have met’
Sam Bellas : you will always be in mine and everyone else’s heart →