Memories of Huw & some Trust news this week: he was always the main guy on the field at lunch, it was like everyone looked up to him 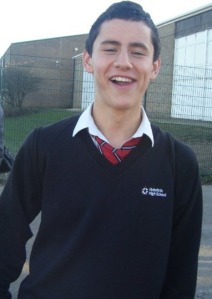 There are some lovely memories from Molly Jowett this week and news of a sponsored walk that her and her family and friends are organising this Sunday.  There are also memories from a year ago as Hepworth under 16s start training again, plus news of donations as the Trust total reaches an incredible £28,000 (and still rising).  Oh and Huw’s Bluebirds beat Town in a thriller infront of a group of Huw’s friends in the Carling Cup.

Molly Jowett and the sponsored walk

Huw was in the same RE class as me and used to sit infront of me in class, he used to turn round and have a good chat with me and others  before the lesson started usually about our hobbies or girls ahahahaa.  Huw always made me laugh with his cheeky little comments and jokes he made towards his friends in class, he never failed to make everyone in the room laugh 🙂

I always used to see huw at break times and lunch times at school outside and we just used to mess around and take silly pictures and he always used to pick up the girls! The picture of huw in the playground at school is my favorite picture of him! Along with the other cheeky ones we took. He was always the main guy on the field at lunch, it was like everyone looked up to him! I’ve had alot of memories with Huw in and out of school that I will never forget! I’m so glad I met him! I’m missing him lots and it sure isn’t the same without him x x x’

Molly, her brother (George) and her family and friends are taking part in a sponsored walk this Sunday – from 12.00 until 4.00 around Netherthong, Upperthong and Holmfirth.  Anyone who is interested in taking part can contact Graeme Hoyle on Facebook or let me know and I’ll give you a mobile.  Thank you to everyone for organising this and to Molly for the lovely memories.

Huw’s Trust has now raised £28,000 and still rising – when it reaches £30,000 we’ll have some more news about how the money is being used to help brain injured people.  There have been amazing donations and fund raising things recently – from those raising thousands to donations of a few pounds.  All are equally important because they represent people’s generosity, personal effort and love for Huw.  There are too many examples to mention them all but one lovely experience today as the owner of Londis in Hinchliffe Mill / Holmbridge stopped me and gave me a donation which is now on the Just Giving site.  She had been waiting to catch me for a few weeks and said that everyone around that area of the Holme Valley is very proud of Huw and what his Trust is doing.  These unexpected donations and kind words mean a lot and reflect just how highly Huw was thought of and adored around here and in other areas where his family live.  Thank you to everyone 🙂

We had the first training session today.  It was great to see the lads, along with a few new players who were all friendly with Huw.  It was also moving as it was the first new season without Huw.  One little thing – reminded me of the first training session a year ago when we all laughed as the Kirklees guys were down there moving the goalposts forward so they were on a good patch of grass meaning ‘Keeper Clowes’ no longer has to make diving saves in a dip which fills with water!    Three of the lads played 5 a side with the adults later which is always a pleasure – reminding me of the 3 times Huw joined us.  I happened to score my only goal of the night early on.  I was a bit disappointed not to get more but if I say so myself it was one of my best – not that that’s saying much!  Big George smiled and laughed as I tucked it away and it reminded me of Huw’s lovely smile when he saw me do something good on the pitch – Huw’s smile used to tell a thousand stories – in the case of my football skills the story was of micky taking, humour, paying a complement to me and a more than a hint of being suprised 🙂

Talking to George also reminded me of the day last August I took George’s registration form round to him – Steve was serving up pizza for George and Chris Traynor!  I texted Huw on 9th August when he was on holiday with Jenny and her parents ‘…………………….Goonna take George R form tomoz! Catch up soon mate! x’  Huw replied ‘………………..And good, hes been waiting lol Cas sends love cya later……….’   As many people will know, text conversations with Huw were entertaining 🙂

Lots of people were amused and pleased to see the draw for the 2nd round of the Carling Cup which featured the Bluebirds vs Town last night – several of Huw’s friends travelled down and were there:  Cal McLaughlin, Sean Brennan, Will Bowers, Sam Briggs, Max Birkhead, Isaac Ezro and Tom Bull – among others I don’t know about.  Everyone I’ve spoken to was mostly concerned it was a good match rather than worrying about the result (including me) – we were thinking of Huw.  And it was a cracker with Cardiff taking an early 2-0 lead only for Town to fight back and take a 3-2 lead with a goal 2 minutes before full time.  But Cardiff took the tie into extra time with an injury time equaliser and eventually went on to win 5-3.  We were all chuffed it was a great advert for football outside the Premiership and it reminded me of a framed ‘Huw 2’ signed Town shirt I have donated by Town in March courtesy of ‘Little’ George Richardson’s request to Town.  It was so fitting that a match that would have meant so much to Huw was a stand out match in which both teams did well.  Oh and just for the stattos among us – maybe Cardiff winning was a bit of pay back for Town edging out Cardiff for the Division 1 (old equivalent of the Premiership) title in 1925 by a fraction of a goal!  Positions in those days were calculated on the basis of ‘goal average’ instead of ‘goal difference’.  And if it had been goal difference as it is today instead of goal difference in 1925, Cardiff would have been League Champions!  Ha ha.

Oh and you can  click here for some pics of the Cardiff vs Town match yesterday.

Thanks for the memories and thoughts of Huw.  We know the love everyone is showing for Huw is heart felt; it is also heart warming and forever ♥

Read more from Personal Memories
← Huw and his beautiful smile in the summer holidays
George ‘Little’ Richardson: You were an amazing, talented, hilarious, and respected person, who will be remembered in the hearts and minds of everyone →