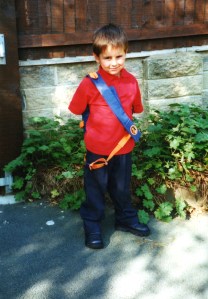 As the schools go back this year, there are lots of memories of Huw starting school and new school years.  Huw was at very happy stages (like he always was) when he started at Upperthong Junior School in 2000 and Holmfirth High School in 2007.  He was always happy at school throughout nursery, junior school and high school.

On his first day at Upperthong it was noted by his teacher that he liked playing physical play fighting games with his friends, and perhaps that wasn’t appropriate.  Over 11 years later during year 10 at Holmfirth High he liked messing about with his friends just as much, but at the age of 15 that also included cuddles and ‘play’ fights with the girls as well as the lads 🙂

Huw did well academically at school as well as with sports.  He also enjoyed music and drama playing drums in groups at both schools, playing the lead role as ‘Cinderfella’ in year 6, and taking part in Grease and West Side Story in years 7 and 8 at Holmfirth High.

Huw developed lovely relationships with his friends at Upperthong and Holmfirth High.  He had lovely friends at school, and like all of us they will miss him this school year.

Good luck to all of Huw’s lovely family and friends this September as they start new years at school, college or uni, especially those friends who were with him in classes at Holmfirth High and in Miss Ward’s form group.  They deserve it 🙂

Here are some photos from happy times in school

There’s a Huw Thatcher Trust Facebook page; ask to be a member of the Group here if you want to

Read more from Personal Memories
← Sponsored walk last Sunday – they avoided the showers but maybe this was helped by visits to the pubs?
The beautiful boy who’s life we were all lucky enough to share, made people smile for 15 & a half years; & he’s still making us smile & inspiring us →