Memories of Christmas times with Huw ♥ ♥ ♥

Huw enjoyed himself at Christmas time every year.  Many of us have lovely memories at Christmas of his smile, banter, sense of fun, nice time with his friends, and his love of his extended and immediate family. Here he is at Christmas time last year – laughing because the star would look like it was sticking out of his head.

A year ago on the Wednesday before Christmas Huw enjoyed a night out bowling with the Hepworth lads, after which he and one of his best friends joined the adults for the first time for 5 a side.  Huw was absolutely accomplished and at home on the pitch that night; the 2 lads were terrific.  Huw got bundled to the floor and got up looking surprised that he had been knocked off the ball; he then flashed a tyical beautiful smile…………..but he made sure it didn’t happen again.

He spent Christmas day at Nick’s with Nick, Jenny and Carys.  We had a great Christmas lunch and went for a lovely walk in the snow at Hade Edge.  Huw spent the evening at Jenny’s.

On Boxing Day last year, Nick, Huw and Carys went to stay for a couple of Days in Cardiff.  These are Huw’s Granny’s recollections of our arrival at her house “My first comment on their arrival was, ‘Huw , how you’ve grown, you’re so tall.’ His response was to pick me up, swing me around, & laughingly call me his ‘Little Granny’.”

Christmas day 2 years ago was spent with Jenny’s family at her house – here he is pictured on that Christmas day.

Earlier that December, Nick and Huw had been to the BBC Sports Personality of the Year show (the year Ryan Giggs won it.)  Here he is messing about with Nick before we left.

Three years ago Huw’s Granny joined us for Christmas and her memories of that day are “I took my festive tablecloth with me. We sat down to lunch, Huw & I sitting opposite each other. We pulled my cracker, & the contents ( a heavy glass bottle stopper ) shot into the air & dropped straight down into the sauce boat full of gravy which flew everywhere! We all roared with laughter, none moreso than Huw, and no damage was done. To this day I’ve never been able to remove the stains from that cloth, and now I’m so glad to see them there.  A treasured memory.  I will be using that cloth again this year.”

Several people and workplaces have given to Huw’s charity in lieu of Christmas cards this year.  Nick’s workplace held fund raising activities at their Christmas do a few weeks ago.  Everyone has been kind and hospitable this year.  Thank you for donating time, love and fund raising.  Thank you everyone for the love and care they showed Huw in 2011 – both before and after March ♥ ♥ ♥

Here are some other pictures of Huw from Christmases. 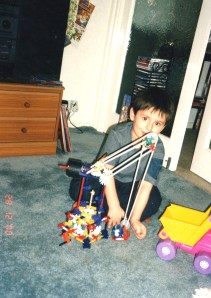 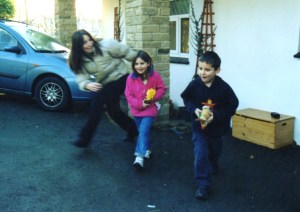 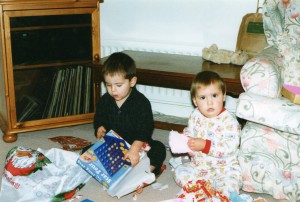 Read more from Personal Memories
← A memory from Abbie Dare: you were one of the loveliest guys I have ever met, you looked after me and never failed to make me laugh
Huw will shine forever – thank you for keeping a light shining for Huw at New Year ♥ ♥ ♥ →