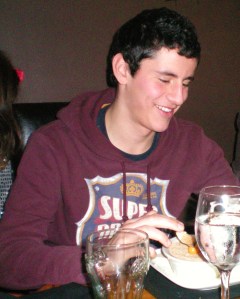 2011 has been a tragic year;  it still seems impossible that Huw is not well into his 17th year and enjoying New Year.  Many people who enjoyed Huw’s company over the years will be thinking about him this New Year.  Here he is on the New Year bank holiday weekend last year.

Whether it was a joke, a smile, a look, or a friendly push – we were enjoying Huw’s company this time last year.  Or it might have been a school lesson in the new year, a sport, a meal, a party, chilling out, or music.  Or it might have been something to eat, a visit to a relative or friend, or a hug, a kiss, a handshake or an embrace.  Whatever it was, it’s something we’ll miss so much over the bank holiday weekend and into 2012. 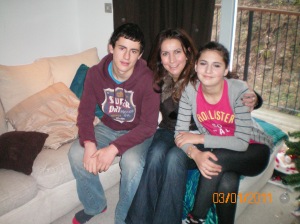 Huw spent New Year’s Eve at a typical teenage party last year – having fun and doing what 15 year olds do.  He had a good night which included plenty of banter the following day!  He spent time with Carys, Jenny, and her family over the New Year weekend, as per these pictures.

Huw and Carys also spent time with Nick, and on the Sunday morning Huw played football for Hepworth against local rivals Honley at Little Wembley.  Hepworth ran out 2-1 winners in a close encounter, which was played with the competitive but sporting spirit that these players always showed when they played eachother; many players from the opposing sides were school pals or local friends.  Huw played a key part in the game – getting forward when he could, setting up the winner with a great through ball and a rock as usual at the back.  The pictures below show him in action that day.

Huw had fun at New Year holidays over the years whether it was spent with cousins, uncles and aunts when he was younger or friends when he was older.  Huw always remembered seeing the fireworks in Brighton at the millenium New Year 12 years ago when he was 4.

Also thinking about other people who left us in 20011, especially the young, including local people, friends or relatives of people I know, and the people of Japan and the Arab countries.

We will remember Huw in our own ways throughout 2012 like we have in 2011.  There will be plenty of events in 2012 as part of the Huw Thatcher Trust for those who are available and want to take part.  However we choose to remember Huw, he will keep shining forever – thank you for keeping a light shining for Huw ♥ ♥ ♥

Read more from Personal Memories
← Memories of Christmas times with Huw ♥ ♥ ♥
A memory frpm Emily Perrons: ‘you would make everyone feel special and somehow lift us all up when we were down’ →