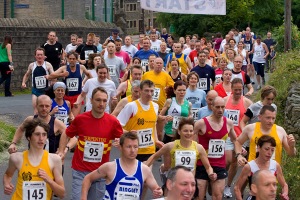 This morning (24th June) saw the 2012 Hepworth Dryad 5 + miles multi terrain race completed in scorching sunshine.  OK I lied, but at least it stayed dry although under-foot it was certainly less than dry!

It was a great way to spend a Sunday morning – there were runners from the age of 14 up to 50+ (well a few might have actually been pushing beyond that actually which is all the more impressive on their parts.)  There were males and females; club runners, fun runners and occassional runners.  There were people Carys and I knew – new friends and old friends – people we recognised but couldn’t remember the names – and other people we didn’t know.  The route was as varied as the line up – including lanes, footpaths, fields, country tracks, streams and bogs!  It was a wonderful route.  Everything about the day was varied and interesting – the route, the line up and the type of people there.  It was fitting that it was like this – because the run raised funds for the Huw Thatcher Trust and Huw in turn had such a wide and varied life. 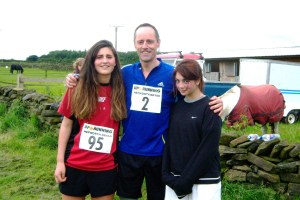 It was lovely to go along and take part with Carys and her friend Olivia – both of whom did really well.  I really want to say thank you to the organiser Paula Moss who is a lovely and giving lady – as well as a big thank you to everyone who helped.  There was a lot involved to put the race on – from the marshalls, the people who marked out the course, the photographer, the people who provided the bacon sandwiches and drinks afterwards, the football club and everyone else who helped out on the day.  And also everyone who contributed to the prizes, programme, food, sponsorship and so on.  It was a true community event.

Over 150 of us took part which is a record for this event – it was great to see Huw’s school friends Sam, Hannah and Katie take part along with Olivia and Carys.  And there were so many friends and people I knew there taking part or helping – Andy, Steve, Kev, Pete, Brownie, Kim, Danielle, Mick, Neal, Tom – to name a few.

Well done to everyone who completed the event, and especially the superb times posted by the winners of each section – check here for the Dryad website that will include details of the winners and times.

It was a pleasure to get round the course, get covered in mud and see so many people doing something positive – and raising £1526 for the Trust into the bargain.

There’s a Huw Thatcher Trust Facebook page; ask to be a member of the Group here if you want to.

Read more from Previous Activities
← Nelson Nunez receives the second Spirit of Huw Thatcher under 15s football award
An update from June: a month that has seen so much happening and lots of preparation for a busy July →