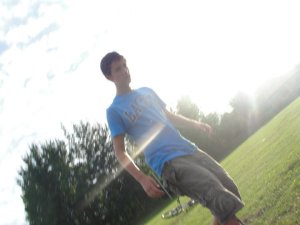 It should be time to do another update at the end of August, but it has been busy since 23rd July – and there is a lot to tell everyone.  There have been lovely things to remember Huw and since July a further £2,000 added to the fundraising total which thanks to all of you, now stands at £64,000.  Here’s a picture of Huw at ‘Little Wembley’ Holmfirth in the summer 2 years ago.

It was good at the end of July to receive cash from Johnny Thatcher and Joe Fish – sponsorship for completing the Reading half marathon earlier this year.  Also Nathalie and Joseph (who live in Holmfirth but who didn’t know Huw) kindly contributed from a sponsored event they completed recently.  It’s lovely to have contributions from people who knew Huw throughout his life as well as others who hadn’t met him but have been touched by what has happened.

The second Huw Thatcher cricket bike ride organised by Joy Oakley and Upperthong Cricket Club took place at the end of July, and raised around £800.  It was a fantastic day out and wasn’t the only contribution from the cricket club in the last month.  Here is the cricket bat signed by England star and one day international captain Alistair Cook which was the main prize in the Upperthong Cricket Club raffle last night. This raised £500 for Huw’s Trust – with so many thanks to Rob Oakely for organising it and doing so much to remember Huw ♥♥♥. The cricket club has really embraced Huw’s Trust  in a lovely way – and thank you to everyone who sold or bought raffle tickets. I delivered the bat to Julie Green in Scholes the other day – her husband is a big cricket fan and was delighted. 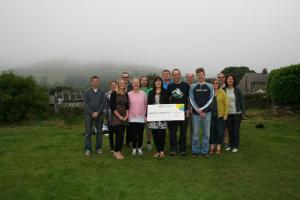 We were also delighted to receive a further payment of £300 from the proceeds of the Hepworth Dryad run – this coincided with formal presentation of the cheque for £1,500 which is pictured here – although most of the funds had been paid back in June. 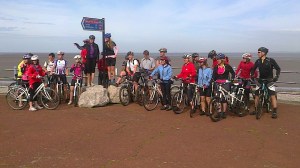 I would also like to mention the Coast to Coast cycle that 30 of us completed on 3rd to 5th August.  Last year many of the same group had traversed the Northern Penines and raised a lot of money for the Trust.  This year the group travelled the longer route from Morecombe to Briddlington – it was not a fund raising event although some of the riders did get sponsorship and for that we are grateful.  We cycled 190 miles in 3 days which was a testing schedule.  It was tremendous to spend time with 30 of Huw’s family, his teenage friends and in some cases their families.  Some of the cyclists hadn’t cycled for many years and one started cycling for the first time in her life just in February – so for those it was a particularly notable achievement.  Everyone on the trip was friendly with Huw and some of the riders completed the last day in Cardiff City shirts for Huw.  Well done to everyone who took part for a wonderful achievement.  Highlights were seeing Carys complete the ride with flying colours, along with Huw’s cousin Doug.  Many thanks of course to the organisers Dave Brennan and Jane Travis along with the support crew – Jenny, Liz, Fran, Tony and Julie.

To finish this update, I want to mention the Olympic games.  I write this article watching the closing ceremony.  Like so many other national events or emotional and important times – there is always the question ‘what would Huw say or think about it?’  There is also the thought that he should be enjoying it with us, and that it is not fare for him. Like so many others he would have enjoyed the opening and closing ceremonies, he would been a great supporter of Usain Bolt – and he would of course have admired the British successes.  He would have enjoyed the Andy Murray success and particularly Jessica Ennis – not only is she a Yorkshire girl but Huw and I had both admired her for various reasons at the Sports Personality of the Year Show at Sheffield in 2009!  The images of John Lennon and Freddie Mercury were particularly poingant – and were a reminder of how much Huw loved his music as well as his sport – and a reminder of how lucky we are to have witnessed such a wonderful sporting and cultural occassion.

The year after Huw was born, Great Britain won a single gold medal at the olympic games in Atlanta.  16 years later, the year after Huw left us – GB won 29!  Observations and statistics like that make it all the more stark that Huw should be here enjoying this wonderful fortnight with some of the best of sport and humanity on display.  It was also a reminder that almost to the day 4 years ago, Huw’s Uncle Mark passed away as the Beijing Olympics were in full flow.

The London Olympics are something we should ALL have enjoyed together – in reality they were a key time in the history of our country without 2 great lads who got on so well.  I hope Huw and Mark are somewhere safe together.  Looking after eachother. Watching their family and friends who love them so much, and who were in turn watching such a wonderful event ♥♥♥

Here are the photos from this update, including some more from the Coast to Coast ride

Read more from Trust News
← The second Huw Thatcher Upperthong Cricket Club cycle challenge was a real success: thank you to everyone
Here are some photos of Huw on holiday over the years ♥♥♥ →