Some recent reflections about Huw and an update from the opening of BIRT’s new facility – Osman House – along with news on fund raising as the Trust total soars past £69,000.

I was lucky to be invited to the opening of Osman House a new facility just opened by BIRT – on 13th November.  I met more of the staff and Trustees of the charity and it was a pleasure to re-connect with the charity as I hadn’t been there for a while.  Some of the staff there are involved in running events and fund raising for BIRT too and I may end up joining them for one of the events in Leeds soon – especially as I have been running quite a bit recently and managed 9 miles last weekend!   I also met Gaby Logan’s mother who is a Trustee of BIRT, so that was nice. 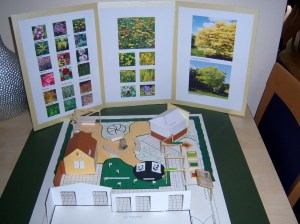 The garden area at Osman House near Leeds has been supported by the Huw Thatcher Trust to the tune of £5,000 and here is a model of what it will look like when it’s finished.  The garden will not only look nice but is a facility that will help service users with their rehab and also provide those who are interested, with a lot of pleasure.

And here is a picture of the garden with work in progress.  I am delighted the Trust funds have now passed £69,000 and am grateful for recent efforts from my colleagues at work and from Jeremy Hoyle who runs the Leeds Abbey Dash this weekend and has raised nearly £200 in the process – good luck Jeremy for this weekend.

Since my last update Carys and I have been to see the new Bond movie – which we both thought was fantastic.  We talked about Huw a lot that night – remembering how much he loved the Bond movies and thinking about the time us 3 went to see Quantum of Solace – and how Huw had explained to both of us what was going on.  He was so good at understanding movie plots.  I think a lot of people may think back to the last time they saw a Bond movie when the new one comes out.  I have always enjoyed the new Bond releases and can remember seeing the new ones over the years at different stages of my life.  Quantum of Solace will always mean so much to me having seen it with Huw – and so will Skyfall as we missed Huw so much the other week.  As an aside it was amusing and a pleasure to see so many people from Holmfirth at the Huddersfield cinema when Carys and I were there for Skyfall.

It was a similar feeling when Carys and I went to see Bolton vs Cardiff at the Reebok Stadiumrecently too.  I was reflecing that I had last been there in 1999 when Huw as just 4.  At the time I thought about the future and whether Huw would want to support the Bluebirds and come to matches with me.  The next meeting between the clubs was the match I went to with Carys.  Carys and I both talked and thought a lot about all the matches that Huw went to.  She wears his scarf to matches and puts it back in his room afterwards.  I look out for her and stand in the way of any dodgy looking characters – just like her big brother used to with her.  We always think about Huw a lot when we go to see City – we think about him a lot full stop ♥♥♥.  We both love you for ever Huw, and I’ll always look out for Carys in a rowdy City crowd, just like you did xxx.

As per my previous update, to confirm that Huw’s friends have again organised a balloon release on his birthday on 25th of the month.  I am so touched with this – that so many of them want to do it again – but also with the sensitive and caring way they have gone about it.  Thank you to Ella, Heather and others and it is a lovely way to remember a young guy who was so special to so many of them.  The helium balloons (with LED lights inside) will be set off from Cliff in Holmfirth early evening on 25th.  Anyone who wants to put a message on a tag and have a balloon (even in their absence) can do so for the sum of £1.50 and by contacting Ella Marshall or Heather Smith at Greenhead College, Kate Benn at New College, Ella’s sister Lucy or Sam Travis at Holmfirth High School – or by contacting me (Nick).

Huw’s Aunty Carol has also been thinking about Huw this month (well over the whole year or two since March 2011 actually) and she has kindly provided tailor made candles for the family to light on Huw’s birthday.  Thank you Carol for your kindness and love.

Finally, our thoughts, support and love go to James Charlesworth (another Hepworth United Football Coach) and his family – as he battles a recently diagnosed illness.

Read more from Trust News
← As Huw’s 17th birthday approaches, here are some lovely photos of him in his first year
The best and most beautiful things are felt in the heart →