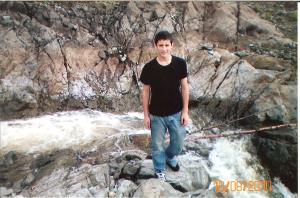 2 years ago Huw was looking forward to exciting years – completing his GCSEs and starting college, getting a job, having a girlfriend, meeting new friends, and having fun with existing ones.  He had such a deep voice (remember him in 2010 and 2011?)  And sometimes he would nearly wet himself laughing about something – he would laugh with Carys about silly things.  Always a hug for his Mum and Sister, and the girls at school, and sometimes even one for his Dad.

Watching Sky footie on a Sunday afternoon – and especially loving it if it was Liverpool or Tottenham.  Admiring Steven Gerrard and Gareth Bale and talking about the Bluebirds – Craig Bellamy, Peter Whittingham and Aran Ramsey (all be it on loan!)

Starting to think about jobs and the future.  Loving his PS3 and enjoying a great social life.  Experimenting with alcohol and pushing the boundaries – in a very playful way.

Laughing when we both noticed what a fit female (his words!)  Laughing and having the best ever time at football training – and loving Hepworth.

So tall and even stooping a bit – perhaps a little self consciously.  Sometimes a slight self conscious smile but usually a beaming one – with dimples that were once child-like and now looked very natural on the slimming face of the most handsome teenager you could imagine.

A strong and increasingly athletic young guy.  Admired and adored.  A leader of the pack.  Doing well at school and taking things seriously when he had to – but having a laugh whenever he could.

Proud of being tall and broad – excelling at cricket and football.  Doing great on the drums and enjoying his music a lot.

Playing football with the Dads and being better than all of them.  Enjoying adult humour and banter with his uncles and with his friends Dads.

Charming his friends Mums and his aunties.

Eating as much as he could whenever he could – but also often trying to eat healthily.

Dislodging a radiator from a wall at a house party.  Telling me he’d had one can of lager when he’d had loads.

Flirting with the girls and being a very, very funny and entertaining guy.

Doing funny voices and having loads of hilarious nick names for people.

Laughing at babies and children.

Keeping quite a few of the teachers busy at school – but also being liked by all of them, and admired by some.

Going out and doing stuff with his friends – a barbecue, swimming outdoors in the summer, playing footie at the park, getting something to eat, going out into the beautiful countryside…….just messing about 🙂

Having the best cousins and friends in the world and being adored by them.  Having friends he had since he was born, and others he’d met more recently.  Having unique and special relationships with each of his friends and cousins.

Just the best.  So wrong – and even more wrong that it was Huw.

We shared him in different ways.

Now we miss him in different ways.

We’ll never forget him in any way.