Every moment spent this spring and summer has been worth it as the total moves past £84,000

It’s been a few weeks since I last did an update here – May, June and July consisted of ticket selling for the gig, organising the Huw football tournament with Huw’s friends, trying to keep fit for things like the Huw cricket club bike ride, and the small matter of taking part in these things.  As I think back on the spring and early summer, after a few weeks’ holiday, I realise how much time was spent on things to do with the Huw Trust.  And as I have reflected, I have also realised it was worth every second. 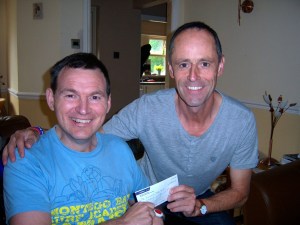 In the last week, I have passed the £3,600 we made at the Picturedrome gig to Richard Ford (£3,000), skate4isaac (£200), and Huw’s main charity BIRT (£400).  Richard is using the funds to build ramps to allow him access to the family caravan and it meant a lot to pass over the cheque to him and Jude the other day on behalf of the Huw Trust, the bands, and everyone who sold and or bought tickets.  It was also a pleasure to meet Isaac Atkinson’s family, and make a donation from Huw’s Trust to the Skate Park at Sands, next to Huw’s bench, in memory of Isaac.  The hand-over of these cheques made me realise what a positive difference we have all made together, and also made me feel really pleased about the time and effort we have given – and will continue to give – to respect and remember Huw.

Various events over the last few weeks have also made me recall Huw’s lovely manner, smile, interests and humour – seeing England play Scotland in football the other day and the interest Huw would have had in that historic fixture – witnessing Cardiff City prepare for the new season and imagining how Huw and I would have been fascinated about the preparation for a Premier League season – seeing Carys and her friends looking so fantastic as they went off to their Year 11 prom and thinking how amazing Huw would look in a suit – and opening a bank account with Carys and imagining the humour, banter and ‘knowing looks’ I would have shared with Huw at the same notable occasion for a 16 year old.  All of these events (and many others) mean so much – whether they’re special days or every day observations – they are not only reflections of what’s happening here and now but also reflections on Huw, what he has missed, what he loved, and who he was set to become.

The Huw Thatcher Trust has now raised over £84,000 and I will do an update on how this is being used in the Autumn.  I also know there is more to come soon as funds come in from recent events and as others are planned.

Recent contributions and commitments to the Huw Trust include 11 year old Elliot Thomas and his Grandad Jim Young, who both swam 1 kilometre in under an hour on 22nd June and raised a lot of money through sponsorship.  Thank you to Jim and Elliot and also to Heidi Thomas (mother of Elliot and daughter of Jim) who organised it.

And then Huw’s 21 year old cousin donated £50 from his first proper pay packet at the end of July – Michael and the rest of Huw’s cousins feel so strongly about Huw and it’s very touching that Michael made this generous gesture last month.

We also received around £100 from the sale of wrist bands at the Zone in Huddersfield so thank you to Paul and the staff at the Zone who continue to be so supportive of the Trust.  Huw and I had great pleasure playing football together at the Zone as recently as February 2011 – I should say that Huw played football (very well indeed) and I tried to keep up with him and the rest of the lads!  Either way it was a lovely moment which I recalled when I was at the Zone recently to see Paul.

At the end of July, over 30 of us enjoyed a 4 day cycling trip.  While it wasn’t a fund raiser or specifically to remember Huw, the first time we did this as a group 2 years ago we did raise a lot of money – and the trip we have now done 3 years on the trot was inspired by what happened to Huw.  We had a perfect 4 days, covering 200 miles and it was so nice to spend time with some of Huw’s friends on that trip, and some of my friends I don’t see enough of.  Here’s a picture of some of us at Huw’s bench at the end of the ride, and some of the lads in Cardiff City shirts – Cardiff for Huw.

There’s a lot more still happening with the Trust, such as Jason and John’s canoeing trip on the bank holiday weekend – I’ll update you on that (and more) next time. 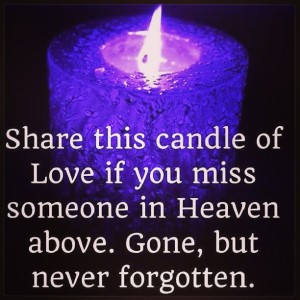 Read more from Trust News
← Part 2 – the Bananas eventually slip up in the penalty shoot out as the Huw Thatcher Trust hits £80,000
Hoping that Huw is somewhere where he knows about everything: fundraising events, GCSE results day & Cardiff City in the Premier League →