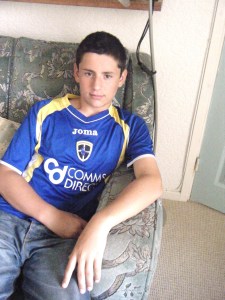 I am so pleased that as of end September 2013 the Huw Thatcher Trust has raised an amazing £85,442. That’s the result of so many people’s efforts over the last 2 1/2 years, and is a wonderful (and growing) tribute to Huw.  I want to update everybody on how the funds are being used.  And at the end of this message, I’ll tell you about this lovely picture of Huw I recently found.

The Huw Trust supports the Brain Injury Rehabilitation Trust (BIRT) – a registered charity that supports people who have had a brain injury – perhaps from being in the forces, through sport, an accident or a medical reason.  The first money we raised was for the BIRT Eyes Alight appeal to enable brain injured people to have something which means a lot to them.  Eyes Alight gifts that Huw’s trust has helped to fund (many of them in Yorkshire) include laptops, a hot air balloon ride, a trip to see Boyzone, a 2 year subscription to Sky Sports and days out watching a favourite football team.

The first residential services to benefit from support from the Trust were Daniel Yorath House and Osman House in Leeds.  Huw lived all of his life in Yorkshire and loved the community spirit, humour, and general quality of life here where he lived.  So it means a lot that BIRT facilities in Yorkshire benefit so much from the Huw Thatcher Trust.

In addition, at Chalkdown House, BIRT’s newest facility which is in Swindon, there is the Huw Thatcher IT Suite which was visited in 2013 by HRH The Princess Royal, and Vice Patron, Gabby Logan. 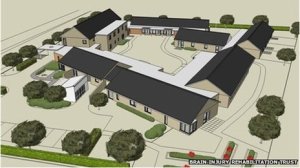 Currently funds from the Huw Trust are being allocated for BIRT’s first service in Wales at Llanelli which you can read about on the BBC website. This will be opened in March 2014.

Barrie Oldham, Chief Exec of The Disabilities Trust expressed his gratitude to The Huw Thatcher Trust: “I would like to record my sincere thanks to Huw’s family and friends for their continuing support – in particular the young people of Huw’s age who have been so generous with their time and efforts”.

Izzy Judd, founder of Eyes Alight (who recently got married to Strictly Come Dancing and McFly star Harry Judd) says “Thanks to the Huw Thatcher Trust, Eyes Alight has been able to fulfil so many special wishes to people going through long term brain injury rehabilitation. Their support has meant so much and we can’t thank them enough for helping us to make ‘Eyes Alight’ ”

As you can see most of the money has gone to BIRT but we are also delighted to have contributed to Richard Ford’s fund which will pay for alterations and equipment needed by Richard as a result of a brain stem stroke he had in June 2012 – Richard coached at the same football club (Hepworth United) that Huw played at.  You can read Richard’s blog here.  And we also mnade a donation to skate4isaac – a project for a skatepark in Holmfirth in memory of Isaac Atkinson.

To finish, I want to tell you about the picture of Huw.  It was taken in Cardiff on 8th August 2009 when Huw was nearly 14.  It was just before Cardiff City’s first match in their new stadium which Huw and I went to that afternoon.  Cardiff won 4-0 and Peter Whittingham scored – Huw’s favourite player and one of only 2 who are still in the City team.

After the game we went to North Devon for a long weekend – I remember every part of that weekend with Huw, Carys and Jenny.  It was a trip down memory lane for us – recalling trips we’d had to Woolacombe when they were toddlers – it was a special weekend.  It was a weekend of lots of laughing in Woolacombe about the past, enjoying the present and looking forward to the future.  These are reasons Cardiff City AFC, and the beautiful village of Woolacombe in North Devon, have truly special places in my heart.  Every picture tells a story……….♥♥♥

Read more from Trust News
← Is he really up there? Of course he is, where else could he be?
Reflections as Ben Earnshaw is presented with the 3rd Huw Thatcher Pride and Passion cricket shield →