The autumn has seen more positive times for the Huw Trust – the spirit of the summer continuing despite the return to school, college, and work after the holidays.  Fund raising events completed by Will and Sam, and preparations for the half marathon in November, are some of the things to tell you about in this update.  And the spirit of the summer was very much in evidence in September as my ‘Shine On’ rose (planted on Huw’s birthday last year) flowered for the second time this year. 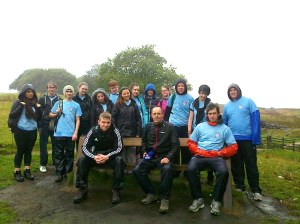 I’ll start by telling you about the marathon 25 mile walk around the South Penines that 17 of us did a few weeks ago.  Huw’s friend Will organised this event, as part of the National Citizenship Scheme (NCS) and the group kindly asked me if I wanted to do it with them.  Never one to turn down the chance of a day’s exercise and time with Huw’s friends, I was delighted to join in, but I must admit it was even harder than I thought!  25 miles is a long way at the best of times, but as that it poured down all day and we could hardly see anything around us, let alone work out where we were going, then it was a really tough day.  But the harder something is, the more of an achievement it is, so well done to the 13 young people and 3 leaders who finished the walk – and I wouldn’t have missed it for the world.

About a third of the way through the route we passed Huw’s bench at Digley as per the above picture.  Standing their in the rain with 16 people giving up their Saturday in terrible conditions – it reminded me again of the lengths people are happy to go to for Huw – and the impact of what happened to him on the wider community. 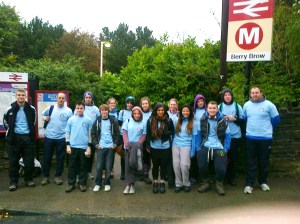 And here are are back at the beginning of the walk – when we were dry and warm – which seemed a long time ago by the time we finished!  The discomfort was made up for by the excellent company and there were some great moments, including laughing at Amy who walked 25 miles through all sorts of mud and stuff, in the rain in ‘Converse’ shoes.  For older readers who may not know – ‘Converse’ is a brand of lightweight cloth-type shoes!  Thank you to Will and all the others for a memorable day out and we’ll let everyone know how much was raised when it’s all collected.

And back in September, Sam Travis and Sam Beever took part in the ’65 Roses Holme Moss Classic’ – this was a tough 65 mile route in the Penines, taking in much of the 2014 Tour de France Yorkshire leg.  Sam T elected to raise money for the Huw Trust, raising a superb amount……Sam and his family are always supportive of the Huw Trust, just like they were of Huw when he was here.  Thanks Sam, and equally well done to Sam B who raised funds for a fantastic charity connected with stroke sufferers in memory of his Dad.  Great effort lads.

Everyone already knows how much the Disabilities Trust appreciates all our efforts and how much the fund raising by people such as Will and Sam is helping others – people who have suffered brain injury maybe in a similar way to how Huw could have done if things had been a little different,  In his weekly Blog on 20th September, Barrie Oldham the Chief Executive of Disabilities Trust pays tribute to the Huw Thatcher Trust – this article helps to show what a meaningful job we’re all doing to help others in Huw’s name – Barrie’s Blog 20th September.

As well as at the fund raising and remembering Huw events during the Autumn, it was also good to see some of Huw’s friends round and about too.  I met Dominic for the first time the other day – Dominic who was a year older than Huw and was part of a group of older lads Huw used to enjoying spending time with.  It was kind of appropriate to bump into Dominic when we were both giving blood locally – and it was good hear a few other anecdotes about Huw – those new stories do mean a lot.

And I had a great few hours out with Ben and Heather a couple of weeks ago too – out on mountain bikes.  It was a great route and a good work out – fortunately they both waited for me at the top of each of the 3 climbs we did.  I thought I did alright………….but age meant they went out ahead on the hills, but it was a great ride and stunning countryside.  Actually it was the day after the NCS walk, so a good way to get rid of the aches and pains from the previous day.

As we now think forward to next month, I can tell you that Huw’s Aunty (Fran) is running for Huw in November – Fran is taking part in the Cardiff 10k on November 17th and it’s her first event since recovering from a nasty back injury and a pulled calf muscle, so good luck to Fran and I know she’ll do well.  Huw really loved his Aunties and Uncles and cousins – including Fran’s (nearly grown up) children Doug and Alana – so it means a lot that Fran is doing this run.

Still on the subject of running for Huw, preparations for the Conwy half marathon on 24th November are going well.  Subject to the odd injury worry, the group taking part is now 9 of us.  At a time when Huw should be approaching his 18th birthday, and finalising his Uni applications, it seems more important than ever to do something positive, and we’re all glad to be contributing to that by running for Huw, the day before his birthday.

At the time of his 18th birthday, we’ll be thinking about Huw when we run through the beautiful North Wales scenery.  Thinking about Huw’s infectious and optimistic personality, typified in this lovely photo.

We’ll be running for the boy who broke our hearts.  The boy who had his future taken away, but who continues in our hearts – wherever he is.

Read more from Trust News
← Reflections as Ben Earnshaw is presented with the 3rd Huw Thatcher Pride and Passion cricket shield
With love to Huw on his 18th birthday; trying to taking some control when things feel so far beyond control →