With love to Huw on his 18th birthday; trying to taking some control when things feel so far beyond control 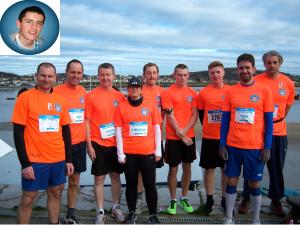 The date of what should be Huw’s 18th birthday is 25th November 2013.  It is a particularly poignant and sad time – Huw should be ‘officially’ entering adulthood and looking forward to the challenges and excitment of the future.  This post tells you about a run a group of us did on the day before Huw’s birthday.  It’s a way of showing our love for Huw and also a way of taking control at a time when things feel far beyond control.

There’s a link at the end of this post to a video of Huw photos with some music.

Here’s a picture of 9 of us at the Conway half marathon on Sunday 24th November.

And a picture of Huw’s Aunty Fran, running the Cardiff 10k on 17th November – raising some funds for the Trust, but mainly because she wanted to run for Huw.  Well done Fran after your recent injuries.  The Movember moustache is a temporary addition courtesty of her make-up by the way!

Tom Dixon, Kev Girdlestone, Michelle Briggs, Steven Harris, George Richardson, Ben Sykes, me, Danny Watson and Phil Brown – all heroes today in Conwy.  Some great times (Phil 1.38, Kev 1.39, Ben, George and me just over 2 hrs, Danny and Steve 2.15 odd, Tom 2.27, Michelle 2.50 odd).  An awesome day running for Huw.  A tough course – full respect to anyone finishing it, let alone in these times.  My 2 hours for you Huw might have to be at Blackpool on a flatter course – the tank was empty at the end so I couldn’t have given any more – despite the kind encouragement of another runner I met on the way and told her all about Huw.  We all gave everything in your name today Huw.  Cardiff City also gave everything drawing with Man U – it’s so sad you can’t be here to see everything wonderful that happened today.  But maybe you’re looking on at the Bluebirds and at everyone in Holmfirth and beyond doing things in your name who realises what an awesome guy you are xxxxxxx

I loved the banter as a group of 9 of us today too – including with Tom, George and Ben in the car.  With so many thanks to Huw’s friend Ben who started getting groups of us running for Huw – at Blackpool in February and now in Conwy in November.  Ben is a great guy and I’ll miss him next year when he leaves in January to join up with the Marines.

George was also one of the runners and I want to tell you about the last game of footie Huw played at ‘Little Wembley’ – George was also in the team and the match was covered by the Huddersfield Examiner.  Two quotes from that report made me and Huw smile at the time.  Firstly it said ‘Hepworth, led by Joe Stephenson, Huw Thatcher and Sam Thompson, spent most of the first half playing a lovely one-touch passing game……..’  Huw was as proud of that mention as he was amused by this quote ‘and, when a clearance fell to Richardson, the striker’s first touch took him past the last defender, where he could easily slide a low shot past the helpless keeper.’  Me, Huw and George knew that it wasn’t a clearance at all, but it was a fine through ball from Huw.  The reporter didn’t know about the flourishing partnership that had developed between the Hepworth centre forward and centre back. Here is a picture of the Huw and George celebrating that goal.  Nearly 3 years later I will be proud to be running the Conwy half marathon with George.

And you can click the YouTube link below for some lovely photos, words and music at a time when we all feel so much love for Huw, and great sadness for what happened nearly 3 years ago:

Finally, another chance to reflect on how Huw’s lovely friends marked his 17th birthday in 2012.

Read more from Trust News
← Running for Huw, cycling for Huw, walking for Huw………anything for Huw
The Huw Trust wins the Lloyds-TSB Community Fund vote and a birthday promise is kept : never giving up on you Huw →