The Huw Trust wins the Lloyds-TSB Community Fund vote and a birthday promise is kept : never giving up on you Huw 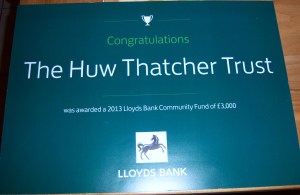 There are two pieces of heartening and inspiring news this week – the results of the Lloyds-TSB Community Fund charity vote, and a further half marathon run I completed at Bedford earlier today.

In September, I asked Huw’s friends and family if they would be happy to vote to help secure a donation from the Lloyds Banking Group Community Fund for The Huw Thatcher Trust.  I am delighted to be able to tell you that the Trust received over 1,000 votes and came second out of four in the Kirklees voting, and therefore received a donation of £3,000 (the 3rd and 4th places received £300).  It means so much that so many people voted for Huw – against much larger and well known charities. Thank you to everybody who voted. I should have known enough people would vote for Huw.  People always vote for Huw just like they did for him in the Huddersfield Examiner Community Awards earlier in the year, and other votes in previous years.

The money is being wisely spent – it will go towards IT and physiotherapy kit at the new BIRT centre in Wales, in the same way that other donations are being used at centres in Yorkshire and elsewhere.  With these additional funds, the Trust has now raised over £90,000 – which is quite amazing and a tribute to the young man that Huw had become. Barrie Oldham the Chief Executive of BIRT says ‘It goes without saying that we are all very grateful to the many people who continue to support the Huw Thatcher Trust and through it, our work.’

I would also like to say thank you to Anne for nominating the Trust in the first place via Lloyds-TSB. Anne is the Mum of one of Huw’s oldest and closest friends.  Also of course thank you to Lloyds-TSB for this fantastic scheme.

On another note, but to me equally important, I am pleased to say that I completed the Bedford Half Marathon today – in 1 hr 59 mins and 21 seconds on a course by no means flat (although not as bad as Conwy).  I am delighted I managed this time.  It was a close run thing to get under 2 hours and I couldn’t have taken much more time off that however hard I had tried.

I couldn’t quite manage to break 2 hours for Huw’s 18th birthday 2 weeks ago at Conwy like I said I would – but I did it today – with Huw’s name on my back, his picture on my chest, and his love in my heart.  It was just you and me today Huw, on our own down in Bedford.  I can’t give you a birthday present like I used to, but I can still stick to my word, and give everything in your name.  Never giving up on you Huw………….just like the hundreds of people who voted for you last month.

Read more from Trust News
← With love to Huw on his 18th birthday; trying to taking some control when things feel so far beyond control
An emotional end to the year at Liverpool: you’ll never walk alone Huw ♥ →