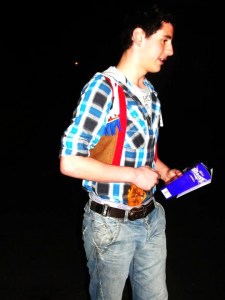 As far as I know, this is the last photo of Huw – taken on Friday 4th March 2011 at Ella’s surprise fancy dress 15th birthday party, dressed as a cowboy. At the party he didn’t have an alcoholic drink (which was agreed beforehand as a result of what had happened at the last party he went to hahaha.) Huw gave Ella a box of Heroes chocolates for her birthday and had a great night. Just before I picked him up at midnight he jumped out in front of a friend’s stationary car to surprise the driver……..in the Cowboy’s outfit……apparently it had the desired effect.

What would he be doing 4 years later? This is what I day dream about Huw these days. END_OF_DOCUMENT_TOKEN_TO_BE_REPLACED